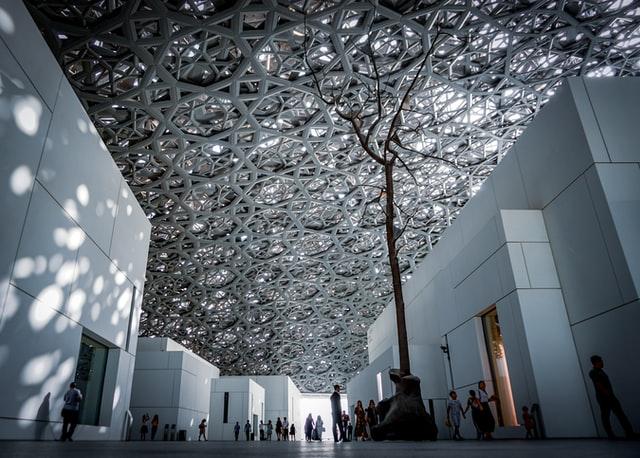 Abu Dhabi
Contenus masquer
1 History of the project
1.1 A few figures
1.2 Video
2 From Dubai
3 How to get to the Louvre Abu Dhabi
3.1 Entrées similaires:

The Louvre is also the name of Abu Dhabi’s most important cultural institution, a museum not to be missed.
Since its opening in 2017, the Louvre Abu Dhabi has already welcomed over 2 million visitors. Located on Saadiyat Island, it has become one of the top tourist attractions to visit on a trip to the UAE.

The creation of this museum was only possible thanks to an agreement between the city of Abu Dhabi and France, which allows the Arab museum to use the name “Louvre” for 30 years and 6 months, to benefit from loans of works and staff specialized in the museum sector and to have four exhibitions per year for 15 years organized by French museums. In true UAE style, the Louvre Abu Dhabi is a colossal work of art in terms of cost and size, which is sure to amaze you with its magnificence and modern functionality. Equally impressive is the museum’s artistic mission: it traces the history of global creativity through hundreds of paintings, sculptures, installations, ceramics, manuscripts and other works from around the world.

History of the project

The Louvre Abu Dhabi project, a monumental work in its own right, is only the first step in a larger project that aims to build a new identity for the city and establish Abu Dhabi as a cultural destination on par with other more famous ones. The economic investment to complete the project is considerable, but the return will certainly be commensurate… or probably much greater.

The Louvre building in Abu Dhabi is a masterpiece of contemporary architecture: for the ticket alone, it is worth it. From a distance, it looks like a refined concrete pile overlooking the sea; inside, it is a luminous labyrinth of white galleries where magnificent artistic creations in the most diverse styles are exhibited. The project was designed by Jean Nouvel, an internationally renowned architect, and author of such emblematic works as the Agbar Tower in Barcelona, or the Quai Branly Museum. The French architect wanted to integrate his work into the landscape, a difficult task considering that the island on which the new Louvre is located was completely deserted when it was built. To do this, he decided to go against the Emirates’ custom of developing buildings in height, and designed a museum composed of low buildings arranged in a (seemingly) haphazard fashion to give visitors the idea of moving through a medina. The hallmark of the Louvre Abu Dhabi is its enormous dome, built to appear to float on water and fully perforated to create an evocative effect of light rain. Abu Dhabi’s cultural district The Louvre Abu Dhabi is the first major work to be built on Saadiyat Island, north of the city center. Until 10 years ago, this area was completely deserted, but today the view is of an unbroken line of cranes at work: the island is destined to become a district entirely dedicated to art and culture and is already marked on road signs as the “Cultural District.

The Louvre Abu Dhabi follows a chronological order rather than dividing the works by geographical areas. It is divided into 4 macro-zones: Ancient Age, Middle Ages, Modern Age, Modern.

Highlights of the museum include the following works: Leonardo da Vinci’s Beautiful Ironworker: placed in the exact center of the exhibition’s path, this painting has already become famous as the “Mona Lisa of Abu Dhabi”. Portrait of Napoleon Bonaparte by Jacques Louis David: a pictorial masterpiece celebrating French grandeur. Fountain of Light: a contemporary work by Chinese artist Ai WeiWei. Germination by Giuseppe Penone: the installation explores a theme very dear to the Italian artist, namely the interconnection between man, nature and art. For Louvre Abu Dhabi by Jenny Holzer: created in 2017, this installation is a tribute to the history of intercultural dialogue that is inspired by three ancient texts by Assyrians and Sumerians. In addition to the permanent exhibition, you can see temporary exhibitions organized in collaboration with prestigious French museums.

The collection of the Louvre Abu Dhabi currently comprises over 600 works, 300 of which are on loan from French museums. The exhibition is divided into 23 galleries plus a vestibule and an interlude, grouped into four macro-zones in chronological order.
The 55 buildings that make up the museum occupy a total area of 64,000 square meters.
They rise 40 meters above sea level. The construction of the museum took 10 years. The dome of the Louvre Abu Dhabi is 180 meters high and has a circumference of 545 meters. The dome consists of 85 upper steel elements supported by 4 pillars and covered with 8 layers of perforated cladding (4 above and 4 below). The cladding layers consist of 7850 aluminum and steel elements in the shape of a star. The total weight of the dome is 7500 t, equivalent to the Eiffel Tower in Paris.

Each window of the museum is equipped with 3 blinds (2 light diffusers and 1 blind) that regulate the amount of light present inside the museum according to the time of day and the season in order to preserve the works of art. The total cost of the Saadiyat Island cultural and economic redevelopment project is estimated at approximately $27 billion.
Inside the museum you will find two cafes, a gourmet restaurant, a souvenir store and a bookstore.

The Louvre Abu Dhabi is a must-see attraction, even if you have limited time and are staying in Dubai: many tourists participate in a convenient daily guided tour from and to Dubai. To get to the Louvre Abu Dhabi from Dubai, allow about an hour and a half by car. Take the E11 southbound and exit at Saadiyat Island/Yas Island to join the Sheikh Khalifa Expressway E12. Continue to the Cultural District/Louvre Abu Dhabi exit and follow the signs to the museum.

How to get to the Louvre Abu Dhabi

The Louvre Abu Dhabi is easily accessible from the city center by car or public transportation. You can take local bus number 94 and get off at the Saadiyat Island stop, which is just a few steps away from the museum entrance. There is a cab stand in front of the main entrance to the visitor parking lot.