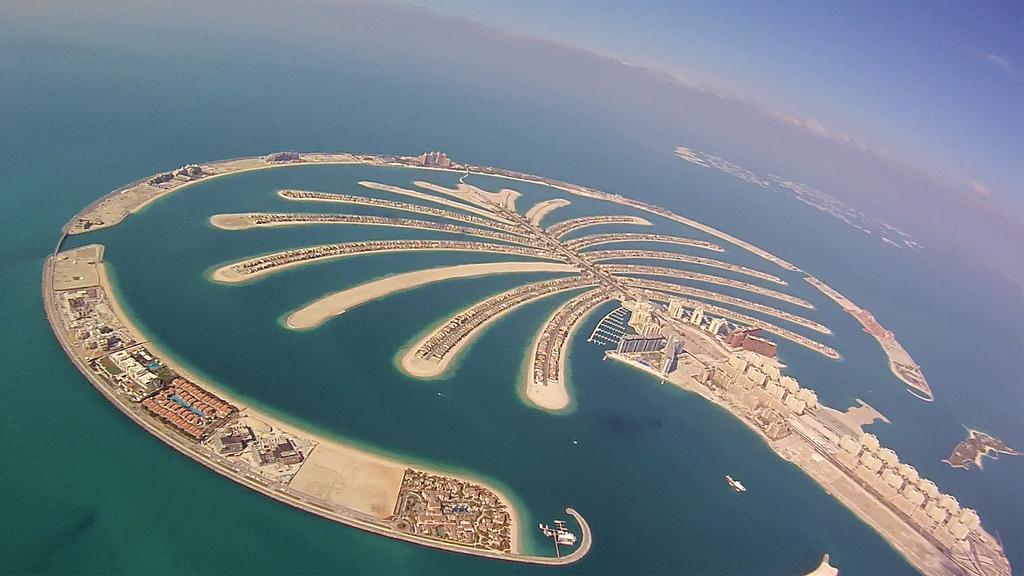 The artificial island in the shape of a palm tree can only be appreciated in all its splendor from above, but it is still worth a visit by sea or by land. The Palm hotel is undoubtedly the emblem of the island, which you can visit without being a guest if you have a reservation in one of its restaurants.

If your budget allows it, a helicopter tour will be the best way to enjoy this place.

The palm-shaped artificial island of Palm Jumeirah is one of the craziest projects in Dubai. Today, it is home to luxury villas and hotels.

It is an artificial island in the shape of a palm tree, created using the technique of reclaiming land from the sea. It was the first of three palm-shaped islands that were to adorn the coast of Dubai: the other two are Palm Jebel Ali, identical in shape but much larger, and Palm Deira, which was originally intended to be even larger than Palm Jebel Ali but, following the financial crisis that hit Dubai in the late 2000s, saw an abrupt halt to the project, which was then significantly scaled back and converted into the Deira Islands.

Palm Jumeirah, as its name suggests, is located in the Jumeirah area: its construction began in June 2001. By October 2007, Palm Jumeirah was the largest island in the world and 75% of the properties were already ready, 500 families were already living there and two years later, 28 luxury hotels from the largest international chains such as Kempinski, Fairmont and Sofitel were already open, as well as hotels that turned heads such as Atlantis, Oceana Residence, Waldorf Astoria or Kingdom of Saba.

What to see in Palm Jumeirah

The undisputed icon of Palm Jumeirah is the Atlantis Hotel, built at its summit and accessible by car or by taking the Dubai Monorail, the panoramic monorail that runs along the trunk of the palm tree. It is a luxury hotel with a truly magnificent design, with a huge Arabic arch in the center that gives the impression of a hole in the middle of the structure. The hotel has its own private beach and all the amenities of the business, and it’s definitely worth a visit from the outside. Another Palm Jumeirah attraction is Aquaventure, a water park built right next to the Atlantis Hotel, also accessible via the Dubai Monorail. There are many attractions for young and old, various pools and water games, and a fully equipped and comfortable beach. The foliage of Palm Jumeirah, on the other hand, is private: there are many multi-million dollar villas, each with a street view (with garden) and one on its own private beach. Speaking of beaches, unless you stay in one of the hotels in the area, it is impossible for ordinary visitors to access them. Palm Jumeirah is therefore an attraction practically reserved for its inhabitants, whether permanent or temporary.

Curiosity The semi-circular outer barrier, called the Crescent, was designed to be uninterrupted, but in doing so, it avoided the natural movement of the tides, making the water stagnant inside the island’s foliage. This problem was solved by adding a few interruptions to the reef, so that water flows in to allow oxygenation of the water.